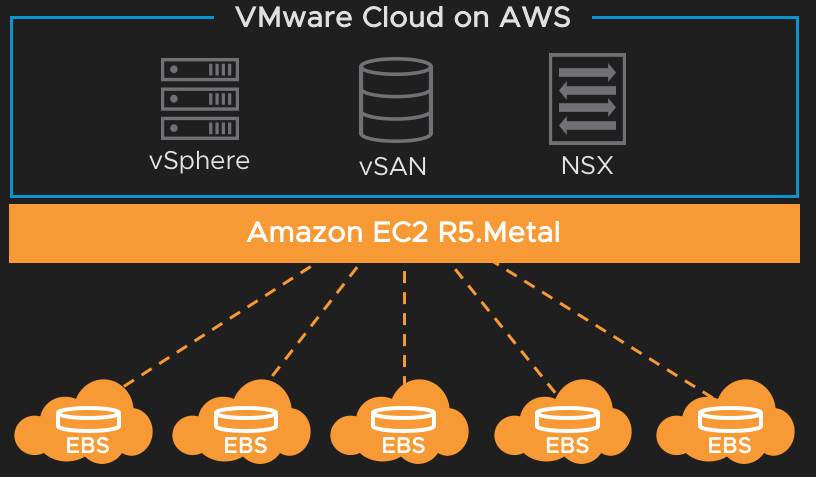 VMware has delivered on rumors that its AWS tie-up would soon adopt new instance types with news of a new way to scale VSAN storage that involves a seemingly unreleased type of cloud server.

VMware Cloud on AWS has previously made a virtue of using just one AWS EC2 instance type, the i3.metal. VMware users have previously told iTnews that new instance types were on the way, and we imagined improved computing power would be high on the list.

It turns out that storage is VMware’s bugbear, because the i3.metal tops out at 15.2 terabytes of disk, which is both a lot and nowhere near the volume that many applications require in this big data age.

Indeed, VMware’s Glenn Sizemore has posted that “many [customers] have asked for significantly more storage and the ability to directly run larger datasets inside the service.”

So VMware’s done something about it by revealing that it can now offer its cloud services on a “new diskless host type” identified as the “EC2 R5.metal”.

That instance type was teased, twice, in July 2018. But it’s yet to appear on AWS’ list of R5 instances even though the R5 instances include several diskless offerings. So perhaps VMware has revealed a little detail about the R5.metal instance type!

But back to the new storage offering, which uses AWS’ Elastic Block Store (EBS) with diskless instances.

EBS offers storage that can attach to an AWS instance without needing to be in the same host and is suggested for reasons rather similar to those advanced for the move from direct-attached storage to shared networked storage in the early 2000s.

VMware likes using EBS because it means VSAN on AWS is freed from the capacity of the hosts it runs on. And also because each EBS volume can reach 16 terabytes and an R5 instance can support 28 volumes for a total of 448 terabytes per host! The new service also scales to petabytes when used with multiple hosts.

VMware’s Sizemore wrote that the new “Elastic vSAN  enables customers to specify at cluster creation how much storage they require on a per-host basis. TheVMware Cloud on AWS Service will then dynamically build the hosts from the component services inside AWS. This flexibility empowers customers to control costs by deploying fewer total hosts where the capacity requirements outstep the compute and memory needs.”

That’s good news for VMware users and partners, because a hybrid VSAN now has the chance to scale a long, long, way, making VMware on AWS more attractive to data-hungry users.